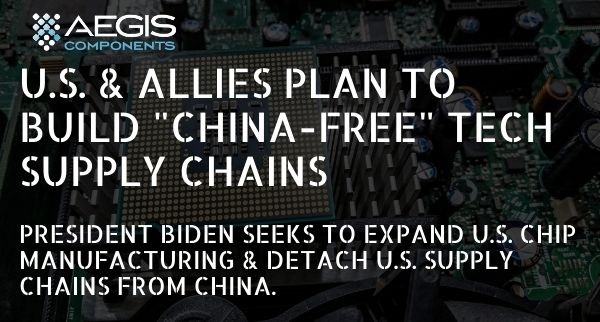 U.S. President Joe Biden is seeking $37bn in funding to expand semiconductor manufacturing in the U.S., amid an accelerated effort to establish tech supply chains independent from China.

While there are many semiconductor companies based in the U.S. and they account for 47% of global chip sales, only 12% of manufacturing takes place in the U.S., according to the Semiconductor Industry Association (SIA). This figure has seen a steady decline, from 37% in 1990.  This decline is largely due to subsidies offered by the governments of our global competitors, which has made the U.S. much less appealing for the new construction of semiconductor manufacturing facilities.  Additionally, other governments have invested substantially into research initiatives to strengthen their own semiconductor capabilities, while the U.S. federal investment has been somewhat flat.  This has led to U.S. tech supply chains becoming dangerously dependent on China and increasingly vulnerable to disaster.  Increasing federal semiconductor research investments would create new jobs, increase U.S. economic growth, and would help maintain U.S. technology leadership in the face of growing global competition.  According to a study from the SIA, each dollar invested by the U.S. government into semiconductor R&D has increased overall U.S. gross domestic product (GDP) by $16.50.  According to the SIA’s report, “tripling federal investments in semiconductor-specific research (from $1.7 billion to $5.1 billion by 2024) and doubling federal investments in semiconductor-related research (from $4.3 billion to $8.6 billion by 2024) would result in 500k more jobs by 2029 and add $161 billion to U.S. GDP by 2029”.  Advancing semiconductor technology positively impacts almost every sector, including automotive, agriculture, bio-medical, and defense. U.S. President Joe Biden is set to sign an executive order to accelerate efforts to develop supply chains for chips and other strategically significant products that are less reliant on China.  The National Defense Authorization Act will aim to strengthen domestic semiconductor manufacturing, as well as pursue partnerships with allies to further strengthen U.S. tech supply chains.

The current chip shortage has forced many U.S. manufacturers to cut production and will undoubtedly have a significant effect on national economies.  For instance, as we mentioned in our recent article “Semiconductor Shortage Constricts the Automotive Industry”, General Motors, Ford, and Fiat Chrysler are among the automotive manufacturers that have reported experiencing this semiconductor shortage.  These shortages have added a degree of urgency, as the U.S. government feels the effects of our vulnerable supply chains.  Detaching its supply chains from China will be an expensive, long-term effort that will require collaboration with allies.

Bearing in mind the coming shifts in the electronic component industry, how can purchasers of electronic components prepare themselves for potentially turbulent times?  Because even the most minor supply chain hiccups can produce a ripple effect of delays and withered profits, supplier diversification is a simple but critical measure to ensure a supply chain’s resilience through turbulent times.  At Aegis Components, our global network of suppliers has been vetted and refined over the last decade.  We also maintain strategically placed locations all around the world to help us locate and secure products globally and offer you the most competitive pricing and terms according to your delivery schedule. 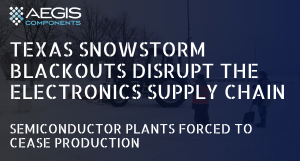 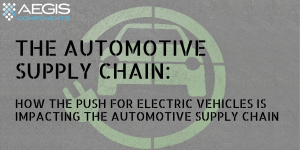